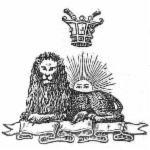 The House of Zarrinkafsch-Bahman has a splendid and colourful history of more than 2000 years, often connected with the long history of the Land of Iran. Hence, our family has mythological Avestan roots as well as Parthian and Sasanian blood, while history became legend and legend became myths....
In paternal line we belong to the Zarrinnaal Family from the Kurdish tribe of
Zarrinkafsh, originally seated at Sehna or Senneh (Sanandaj), the capital city of the Persian province of Kurdistan and thus were named Zarrinkafsch. Several tribal chiefs or begs of this clan worked as bureaucratics for the Persian state and over generations the family is connected by blood to the Qajar Dynasty of Persia (r. 1785 to 1925).
In maternal line we belong directly to the Bahman-Qajar princely line, the family of Prince Bahman Mirza Qajar (1810-1884), the famous Wali of Azerbaijan. 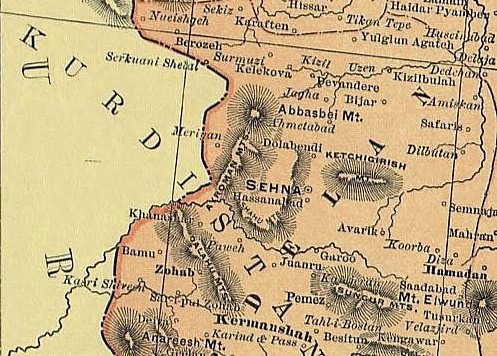 We originated from Persia's province Ardalan in Kurdistan with its capital city of Sehna or Senneh which is today's Sanandaj.
To watch a short historical summary about the family's past heads - click here.)
Origin of the Family Name
Unlike in Europe, where family names were used commonly since the Middle Ages, in Persia or Iran family names were not known since they were mandated by Reza Shah Pahlawi in 1930 when his modernization reforms reached all spheres of social life. Until these reforms, there was neither need nor tradition to use hereditary family names in the formal meaning of today. Instead, individuals were distinguished by characteristic surnames. Only some distinct tribes bore names their members sometimes were named after, like e.g. the "Afshar", "Zand" or "Qajar" lines and finally the "Zarrinkafsh" tribe, too. Mainly commoners as well as noble men were named either to their original homeplace, village, town or province, like e.g. "Shirazi", "Esfahani", "Tabrizi", or "Kordestani" (meaning those, who came from Kurdistan, etc.), or to an alledged ancestor such as "Bahman" (-> Bahman Mirza), to a job or office such as "Monshi" (i.e. secretary), "Lashkar-newis" (i.e. army scribe) and "Wali" (i.e. vicegerent), or to honorific titles (laqab) such as "Moayyer ol-Mamalek" (lit. "Assayer of the Realm"), "Nasr-e Lashkar" (lit. "Defender of the Army"), "Zia os-Soltan" (lit. "Splendour of the Sovereign"), etc.
Often men of public life only were known by their special titles, and when it came usually in 1930 to choose a name, many of those families, who had one or several titled members, chose a family name, that was taken from the first part of their former laqab, such as for example the title "Moayyer ol-Mamalek" became the family name of "Moayyeri", "Sana ol-Molk" became "Sana'i", etc.
About the history and origin of our own family and surname Mr Borhan Ayazi states in his historical book about the city of Sanandaj A’ineh’-ye Sanandaj (“Mirror of Sanandaj”), 1360, p. 31, chapter ‘Emarat-e Khusrowabad (“The Residence of Khusrowabad”):
“…before the year of 1632 Senneh was a little settlement. In this little settlement the tribe of Zarrinkafsh had a respected life. And the historians told us about the family of Zarrinkafsh: The tribe of Zarrinkafsh, which is called in Kurdish dialect Kosh-e Zarrin, has an ancestry line going back to Tus-Nowzar, a famous hero in the Shahnameh. This very same tribe of Zarrinkafsh were the original inhabitants of Senneh (Sanandaj) before the clan of the Ardalans. The peak of the lower part of town, resting between town and the Qeshlaq river, this peak had been Tus-Nowzar’s camp, because there his tent was made and wine was served. And this is the reason why this peak became popular as ‘Peak of Tus-Nowzar’. There you have a nice view there, and from East and West, North and South it is a beautiful panorama. Regardless of which side one enters the city of Sanandaj, this peak is always visible. Thus, the members of the tribe of Zarrinkafsh, who were the first settlers in Senneh, wore the ‘klut’ (a distinct headgear) and the ‘shala'i’ (a black shawl around the headgear), which was wrapped around the headgear in a specific way. And they wore shoes stitched with golden silk on their feet, which had been the attribute for royal ancestry. And this was the reason why that tribe was called Zarrin Kafsh i. e. “Golden Shoe”. Some of these people descending from the tribe of Zarrinkafsh and the House of Nowzar still resided in Sanandaj until now and live a respected and honoured life."²
Other authors mentiond this story as well, like Mrs Sheerin Ardalan in her book
Les Kurdes Ardalân, Paris 2004, on page 40:
"Le nouveau vâli [Soleyman Khan Ardalan] choisit l'ancien bourg de Sena/Sanandaj, fief de la vieille tribu des Kafsh-e Zarrin ("bottines d'or") situé à un farsang de Hasanâbâd, comme capitale. ..." And in footnote 112 at that page she also wrote: "Cette très anciennes tribu remonte à Tus, fils de Nowzar, héros et sepahdâr (chef de l'armée), aux bottines d'or, du roi mythique Key Khosrow. Jusqu'à la première moitié de notre siècle, les hommes et femmes de cette tribu continuèrent à porter des chaussures en cannetille d'or (golâbtun), symbole de la royauté dans l'ancienne Perse. Une colline à l'est de Sena [Sanandaj] porte encore aujourd'hui le nom de Tus-e Nowzar, en souvenir des agapes que celui-ci organisait à cet endroit." 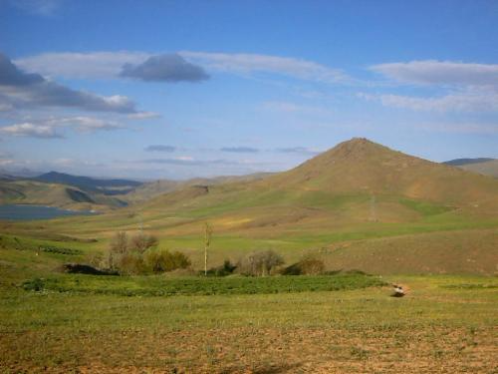