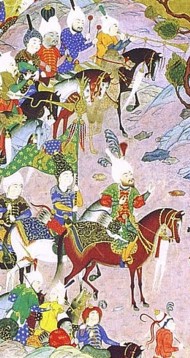 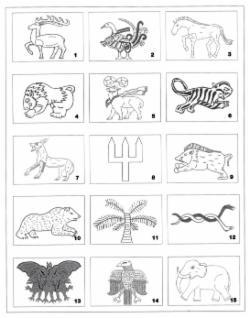 Crests of the Iranian warriors: 1. Ahug (deer), 2. Tardarw (bird), 3. Asp (horse) for the House of Zangeh, 4. Shaigr (lion) for the House of Godarz, 5. Warran (ram) for the House of Bahram, 6. Babr (tiger) for the House of Shidush, 7. Gorg (wolf) for the House of Gev, 8. Thritha Zardusht (trident), 9. Baraz (boar) for the House of Goraz, 10. Khirs (bear), 11. Draxt (tree), 12. Garzag (snakes), 13. Haftan-bokht (dragon) for the House of Rostam, 14. Humay (phoenix), 15. Pil (elephant) for the House of Tus. (Source: Dr. Kaveh Farrokh, p. 21.)
The legend further says that eleven mythological offspring followed their progenitor Tus. Their names were Yawar, Kardank, Tiruyeh, Aubid (Avid), Karvan, Karen (Qaren), Veshapur I, Nersi, Zahan, Veshapur II and Sokhra.
Ehsan Yarshater mentioned that the historical pendant to the mythological House of Tus could be found in a branch of the Parthian Arsacid Dynasty (247 BC to 224 AD), and the dispute between the royal heroes Tus and Godarz may reflect a rivalry between two powerful Parthian noble houses. Such a war of succession happened when different lines of the Arsacides (Ashkanian) struggled for becoming Great King of the Parthian Empire which was only known by later Persian historians as a kingdom of 18 "petty rulers" (Mid. kadak-khwaday, Arab. moluk al-tawa'ef).
Therefore, the figure of Godarz can be identified as the historic “Satrap of Satraps” Gotarzes son of Gev, who occupied the Parthian throne as rival-king (r. 40 and 45-51), when adopted as son by Artabanos II (r. 10-40) and ruled after him and his native son Vardanes I (r. 40-45). Gotarzes' own rule was attacked by another Arsacid rival-king called Meherdates (r. 49-50), the son of Vonones I (r. 8-11) and grandson of Phraates IV (r. 37-2 BC) – but this prince failed at the end.
In the same way, the House of Tus finds its role model in a branch of the Parthian noble house of Karen, since in both families the very same names and persons appeared up from Karen, son of Karvan.
The House of Karen (also Karen-Pahlavi) were an aristocratic feudal family of Hyrcania (Mid. Verkana, Pers. Gorgan, which means lit. “Land of the Wolves”), a satrapy situated on the southern shores of the Caspian Sea. The seat of the house lay at Mah Nihawand, about 65 km south of Ecbatana (Hamadan) in the province of Media. The Karenas claimed descent from Karen (Arab. Qaren), a figure of folklore and son of the equally mythical Kaveh the Blacksmith. It is said that Karen became commander of King Manoutchehr, and during the reign of Nowzar fought against the Turanians. When Barman, the son of Visa, one of the Turanian heroes, killed the aged Kavadh, Karen in revenge killed Barman. Finally Karen was one of the seven petty rulers instituted by King Vishtasp (Kay Goshtasp - the father of the historical Darius the Great) in Mah Nihawand.
Indeed, the House of Karen is first attested in the Arsacid era, specifically as one of the so-called Seven Parthian Clans or “Seven Houses” (haft khandan), feudal families affiliated with the Parthian and later Sassanian court. These seven houses were the House of Aspahapet or Spandiyar of Apartvaticene (Yazd), the House of Dhahae or Zik of Astabene (Kushan), the House of Karen of Hyrcania (Gorgan), the House of Mehran of Comisene (Semnan), the House of Parni or Nahabad of Parthyene (Parthia), the House of Sohae or Spahbad of Margiane (Merv), and the House of Suren of Sakestan (Sistan). They held important posts in military and administration and became provincial sub-rulers or satraps (Mid. khashtraban, Pers. shahrbed) of Iranian territories. Only two of the seven - the House of Suren and the House of Karen - are actually attested in relevant sources dateable to the Arsacid period. They were similar in dignity and the most noble and oldest feudal houses. The remaining five families emerged not until Sassanid times and their genealogies only were extended to the Parthians in order to emphasize the antiquity of their families. The members of the Karen clan mostly are only known by their hereditary title of Karen (Qaren), not by their given names. And according to historians the Karenas descended from the Arsacid royal stock, to be more precise from Arshavir, better known as Great King Phraates IV. The first one, known under this name was Arshavir’s son Karen-Pahlav (Arab. Qaren al-falhawi), meaning literally “Karen the Parthian”. He was commander under the already mentioned Arsacid King Meherdates and prevailed by Gotarzes in 50 AD.
His special rivalry with Gotarzes is also an indicator to identify the Parthian Karenas with the House of Tus and their dispute with Godarz. However, the two centuries following his time were the period in which the older Iranian myths became transformed into a chivalresque epic in which many historical figures were introduced into the older form of the legend, among them the historical Karen indentified as Karen son of Karvan from the House of Tus.
When the Persian Sassanid Ardashir I (r. 224- 240) established himself as “King of Kings” (shah-an-shah) meaning emperor of Iran after killing the last Parthian Artabanos IV (r. 213-224) in the Battle of Hormizdagan, the seven purportedly “Parthian” feudal aristocracies including the Karenas allied with the new founded Sassanian Dynasty (224 to 651 AD). While the clan of Suren were "arch-marshalls" responsible for the army commando, under the Sassanians the Karenas were the “arch-treasurers” in charge of the empire’s finances, and their most popular members were:
Peroz Karen-Pahlav, who was their clan's head, strategos or satrap of Shiraz and envoy of Ardashir I to Artabanos IV.
Ardakhshir Karen-Pahlav, who was a companion of Narseh (r. 293-302).
Ardawan Karen-Pahlav, who was the army commander (spahbedh) of Shapur II (r. 309-379) and conquered vast territories in Iran’s north for the Sassanids.
Karen son of Goshtasp Karen-Pahlav, who lived during the time of Yazdgerd I (r. 399-420).
Parsi Karen-Pahlav son of Borzmehr, who lived under Bahram V Gur (r. 420-438). 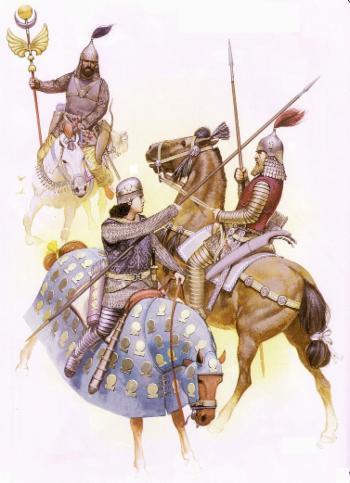 A Sassanid knight from the House of Karen (left) in combat with a Parthian (right), drawing according to the Ardashir-relief. (Source: Peter Wilcox, plate D, p. 28.) 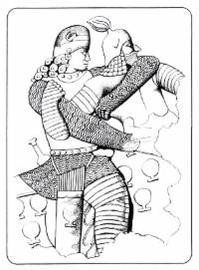 A Karen struggling a Parthian (detail of the Ardashir-relief). (Source: Peter Wilcox, p. 23.)
One other member of the famous House of Karen was Sokhra Zarmehr, our own very immediate ancestor! Sokhra was the son of Veshapur, scion of Karen son of Karvan (Qaren al-falhawi), and therefore a descendent of the House of Tus-Nowzar. Born in Shiraz, where his family resided, he became “margrave” (marzban) of Sakestan. During the reign of Peroz (r. 459-484), Sokhra was army commander defeating the Armenians headed by Vahan in 483, and then became sometimes regent of the empire (vuzurg-framandar). After Peroz’ death in 484 AD he took residence in the northern parts of the Sassanid Empire and instituted Balash (r. 484-488) as the royal successor. Under him and his successor Kavadh (r. 488-496 and 498-531), whom he had released from prison, Sokhra Zarmehr was vicegerent of Kabul, Ghazna and Zabul, and then head of political affairs, but finally when becoming too powerful, he was betrayed by King Kavadh, overthrown and handed out to his opponent Shapur Mehran-Pahlav, who killed him on behalf of the king. Sokhra Zarmehr had two sons: Zarmehr (Borzmehr) and Qaren.
Zarmehr reinstated Kavadh in 598, and he and his brother fought in the battle against the White Huns (Hephthalites) and supported and aided Khusrow I. Anushiravan (r. 531-579). For their loyalty Khusrow gave Zarmehr the fief of Zabulestan and the rulership over Gilan (r. 537-558), where his line reigned as Persian vicegerents until 687 AD. His brother Qaren got the area of Jebel al-Qaren or Koh-e Qaren (“Mount of Qaren”) in Mazanderan and in 565 AD was made Espehbedh (hereditary governor) of Tabaristan (r. 565-602), where his line ruled as Qarenid Dynasty until the end of the ninth century. The second Sokhra (Arab. Sufrai) son of Qaren son of Sokhra was instituted by Khusrow I in 572 as governor of Tabaristan. Qaren son of the Qarens (Qaren ben Qarinas al-Qarnas) held the troop command under Ardashir III (r. 628-629), but in 637 he fled from the battle of Qadessiyah and was defeated by the Arab Ibn Amir at Hamadan. During the Arab invasion the Karenas tried to maintain semi-independence by paying tribute to the Caliphate, and some of the lands of the Karenas appear to have remained independent until the 11th century, after which the House of Karen is no longer attested.
In ancient times Sassanid society was divided into the four classes of Priests (atorbanan), Warriors (arteshtaran), Scribes (dabiran), and Peasants (vasteryoshan). The nobility was a mixture of old Parthian clans, Persian aristocratic families, and noble families from subjected territories, and was divided into local kings (shahrdaran), royal princes (vaspuhragan), the heads of the great clans (vuzurgan), and the other noble freemen (azadan), headed by their Sassanid overlord, the emperor. Traditional symbols of these aristocrats were tiara, golden ear rings and golden belt – often decorated with their heraldic emblems on their armour and banners. In addition to that the mounted generals (savaran) of the Sassanid army also wore golden shoes as symbol of their royal status and to distinguish from ordinary soldiers.
One of these brave royal commanders from Sokhra’s line of the Karenas was
Gustaham ben Ashak-e Zarrinkafsh (Gustaham son of Arsaces the Gold Shoe, i.e. “from the royal stock”).
In the Dastan-e Amir Hamza p. 231 the story about this general is told when Emperor Khusrow Anoushiravan planned to defeat the rebellious Bahram Gur and ordered his wise vizier Buzurjmehr to send a military campaign:
''Naushervan said: I authorize you to appoint whomever you find worthy of leading this campaign and crushing this recreant! Buzurjmehr chose Gustham
ben Ashk-e Zarrin Kafsh, a renowned Sassanid commander, eminent in that assembly of warriors, and had the Emperor confer upon him a robe of honor. He was sent at the head of twelve thousand fierce and sanguine troops, with a retinue of very many valiant lords and ferocious and lionhearted veterans, for the correction and chastisement of Bahram Gur, the Emperor of China, with strict orders to exact also from Bahram Gur an offering in the way of a fine, in addition to the four years’ tribute due in arrears, and in the event of the least show of resistance, to inflict a humiliating defeat upon him, and bring him to Ctesiphon chained and fettered. Gustham was sternly enjoined not to depart from or mitigate those commands, and on receiving his orders, he made obediance and left for China."
Following the total defeat of the Sassanians by the Muslim Arabs at the Battle of Nihawand 642 AD and the conquest of the north-western part of the Persian province of Media with today’s Kurdistan, his family pledged allegiance to the Caliphate and could still secure some of their domains. Under the Arabs his line was called "Zarrinkafsh ben Naudharan" and he became the founder and eponym of our family! 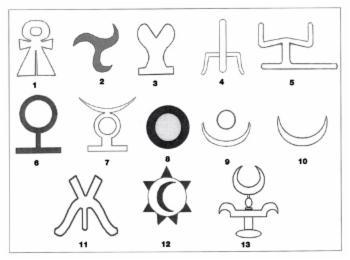