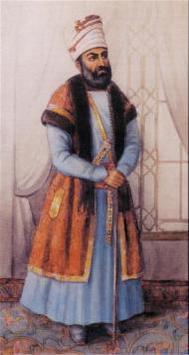 The Kurdish Era (1448-1867)
“Once upon a time in the land of Shahrizor there ruled a tyrant king named Dhahak from Mesopotamia, who was in connection with the world of demons. From both of his shoulders grew a snake’s head, always hungry. To calm down these beasts they had to been feed daily with the brains of two children. One day the king’s servants had the idea to take lambs instead of the poor children in order to feed the snakes with the animals’ brains. The camouflage worked and the children safed this way were brought away and entrusted in the high mountains’ care. Here they formed the beginnings of the Kurdish people. However, Kaveh the Blacksmith, who lived in Dhahak’s realm, had lost eight of his children to this bloody tyrant. When it seemed that he will loose his ninth and last child, anger and despair came over him and he draped his leather apron from a wooden spear as a standard, and under this banner he call the people on Mount Kalikawa to revolt. They attacked the tyrant’s palace, overwhelmed his guards and ended his rulership, when the king was killed by Kaveh himself with his sledgehammer. This raising, which founded the Kurdish people’s freedom took place on the 21 March of 1234 before Hijjra (612 BC)…”
This date was also the year, when the ancient Medes defeated the Assyrian Empire and founded the first Iranian state based in today’s Kurdistan. Nearly two thousand years later, in 1177, the region of Media was named Kurdistan (i.e. "Land of the Kurds") and became a province of the Seljuq Empire (1138 to 1194). The Kurds were an old Western Iranian (Aryan) race tracing back to the ancient Medes and Islamized in the 7th century. According to old common feudal patterns they had a stringent social hierarchy and their area was divided into several fiefdoms (beylik), ruled by chieftains of the local tribal aristocracy, called Mir, Beyg
and Agha. In the following centuries this region became a battlefield and puffer-zone between the Turkish sultans of the Ottoman Empire and the Iranian shahs of the Persian Empire.
In 1501 the first ruler of the Persian Safavid Dynasty, Shah Esmail I Safavi (r. 1501-1524), founder of the modern Persian Empire, conquered all of Kurdistan and made it a Persian domain. His successors lost a great part to the Turkish Ottomans in different battles, but in 1603 the 4th Safavid Shah Abbas I the Great (r. 1589-1629) started to reconquer the Kurdish provinces for Persia. Also, becoming the "remaker of Iran" he restricted the political power of his Turkic Kizilbash elite, which once had supported his dynasty to get the crown, and assigned provincial Persian notables for governmental service. Thus, during his reign our own family began to reach local prominence in Kurdistan when through fourteen generations and four hundred years its members were installed in military and administrative posts by several Persian shahs from the Safavid (1501 to 1722), Afsharid (1736 to 1796) and finally Qajar (1785 to 1925) dynasties, as well as in state offices by the Kurdish Ardalan rulers (1187 to 1867). These brave men were beygs or tribal Kurdish rulers:
1. Mohammad Ali Beyg "Zarrinnaal" Mohammad Ali Beyg, who was called by nickname "Zarrinnaal" (lit. "Golden Horseshoe"), was ordered by Shah Abbas I the Great to make war on the Ottomans; and on 24th of August 1605 with the aid of his troops from the Mokri tribes could reconquer the Turkish occupied province of Kurdistan for Persia. After that he was made vicegerent (wali) of Kurdistan and reigned probably from 1609 to 1615 as governor and was head of the administration and army, chief judge and legislator. There, he himself and his entire tribal confederacy (il) were known and henceforth called by the name of "Zarrinnaal". His family belonged to the Kurdish clan of Zarrinkafsh from Sanandaj, and went far back to Abu al-Fawaris Zarrinkafsh, a local notable in the 1090's during the Seljuqs and a chief accountant of the Shiite tombs in the city of Rayy. The family settled in Sanandaj minimum since the year 852 A.H. (1448 A.D.) and possessed that area as their hereditary fief (beylik).
In 1631 Mohammad Ali Beyg was Persian ambassador to the Mughal court of India sent by Shah Abbas to went in further negotiations about the Province of Kandahar. Kandahar, one part of the Mughal domains, was given by Humayoun to Shah Tahmasp, and then annexed by Humayoun's successor Akbar. In 1622 Shah Abbas reconquered the area and regarded it as his legal heritage. A peace treaty with Jahangir should secure this status quo. Arriving in time for the New Year festival in March 1631 Mohammad Ali Beyg arrived in India and remained there until October 1632. 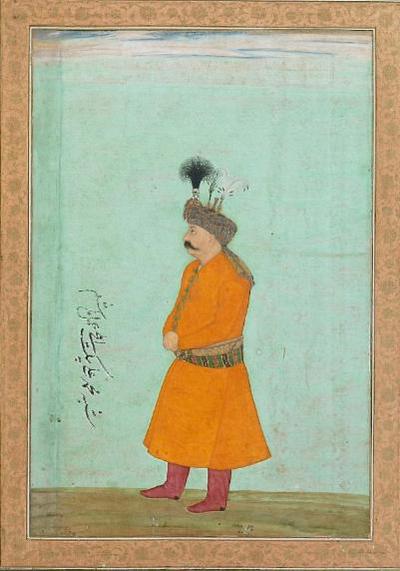 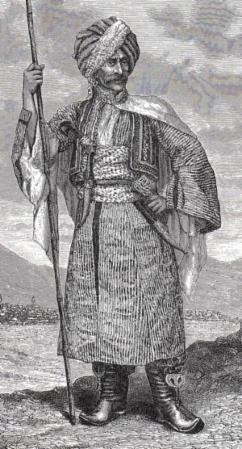 Drawings of the Kurdish Aghas of Senneh, Ali Beyg "Monshi-bashi" and Oghli Beyg "Monshi" made by C. Lapente and published around 1870.
Relations of the Zarrinnaals to the Ardalan Family
The relations of our family with the Ardalan dynasty which ruled (Persian) Kurdistan as princes and hereditary governor-generals until 1867 are various:
- Shah Abbas appointed Mohammad Ali Beyg Zarrinnaal to Wali of Kurdistan as a counterpart to the Ardalan princes.
- Wali Soleyman Khan Ardalan chose 1634 the old Zarrin Kafsh fiefdom of Senneh (Sanandaj), the Zarrinnaal's original hometown, as his new capital, so the Zarrinnaal became members of the Ardalanic nobility.
- When after the Afghan debacle 1709-1720 the Zarrinnaal Hajji Eskandar Beyg-e Afghan came back to Kurdistan, his family again settled in Sanandaj and became prominent members of the Ardalan princely court especially with Wazir Abbas Beyg "Rais-e Il", chief of that tribe which ruled the whole area for centuries, Oghli Beyg as big landlord and Ali Beyg "Monshi-bashi" (1770-1826) and Oghli Beyg Zarrinnaal II "Monshi ol-Molk" (1808-1868) as hereditary chief secretaries to the Ardalan princes.
- Oghli Beyg II married Noor-Jahan (Noorjan) Khanom, daughter of Wali Amanollah Khan Ardalan I.
- Their both daughter Zarrin-Taj (1860-1884) married her cousin Abol Hassan Khan Ardalan "Fakhr ol-Molk" (1862-1926) as his first wife and was the mother of Gholam Reza Ardalan "Fakhr ol-Mamalek". While their son Agha Mirza Zaman Khan left Sanandaj for Tehran to make carreer at the Qajar Imperial court of Nasser od-Din Shah... 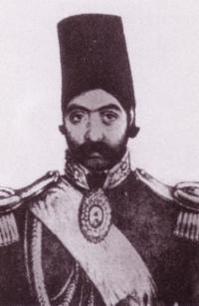 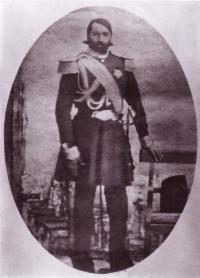 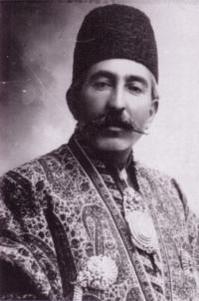 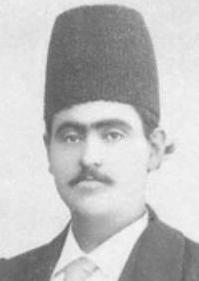